For Christians who want to be more productive and more confident they’re using their resources, talents, and time for God’s glory, Reagan Rose (M.Div 2018) has become a trusted, go-to voice. His ministry, Redeeming Productivity, has a website, podcast, weekly newsletter, academy, and now a book that helps Christians “get more done for the glory of God” (redeemingproductivity.com).

If someone had described that future to Reagan when he was in high school and college, he would have laughed it off. At the time, almost any other career seemed more likely than Bible teacher and productivity guru.

“I nearly flunked out of high school, so this has not been a lifelong passion of mine,” Reagan said. “In high school and through the first two years of college, I was addicted to online video games. I didn’t have self-control and could not stop playing. By my junior year of college, I was at a new school, and I realized that my life was going nowhere. I needed to make a change.”

Reagan’s path to productivity started with a few simple questions. How do you actually make a schedule? How do you stop wasting time? How do you set goals and accomplish them?  He found helpful answers in books like Getting Things Done by David Allen and The 7 Habits of Highly Effective People by Steven Covey. But as helpful as those books were, something was missing.

“In nearly all the productivity literature I consumed, I started noticing that the way these authors and speakers talked about productivity assumed a lot of unbiblical ideas,” Reagan said. “They assumed that productivity was good because it will make you happy, or it was implied that you want to be productive so that you can be rich.”

Neither of those goals fit Reagan’s growing understanding of the Bible. Alongside his interest in productivity, Reagan was also becoming more and more invested in Scripture. Through the radio ministry of John MacArthur, Reagan realized he was in an unhealthy church. He left, began ministering in a more biblically grounded church, and began to consider a life of ministry. In a few years, God had transformed a video game-addicted young man into a serious student of God’s Word who wanted to use his time, resources, and talents for the glory of God. 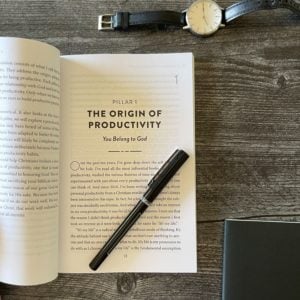 In 2014, Reagan enrolled at The Master’s Seminary and came with his wife to Southern California to sit under the ministry of the man who had shaped his theology so much in recent years. At The Master’s Seminary, he quickly realized that a lot of his fellow students had the right desires—they wanted to know Scripture and serve the Lord—but they didn’t know some of the basics of time management, like keeping a calendar or making a schedule and sticking to it. Reagan figured he could at least help some of his friends in those areas, so he started a blog called The Pastor’s Week.

“I wanted to write about productivity for pastors specifically,” Reagan said. “I saw a massive problem because pastoral ministry is a self-directed profession. Most pastors don’t have someone telling them how to spend their time. They must figure time management out on their own. As a result, pastors either work themselves to death because they don’t know how to put limits on themselves, or they waste time because they don’t have a plan for each day.”

“At times, social media can seem to be quite productive,” Reagan said. “You are connecting with people, you are even teaching the Bible. You can get feedback that lets you know people are benefiting from the content you post. But too much time on social media can distract you from God’s primary calling on your life, ‘the flock of God among you’ (1 Peter 5:2). There’s a term for that. It’s productive procrastination, where you are doing something that has value, but it’s not the main thing you should be spending your time on.”

The second roadblock to good time management is central to the pastor’s job description: people.

“Pastoral ministry is people work,” Reagan said. “Obviously you are preparing the sermon. You are running the church. But a huge part of your job is relationships. And to manage those well, and maximize your ministry, you can’t allow two or three people in your church to take up 80% of your time. There’s wisdom in placing appropriate boundaries around some of those challenging relationships. That can be hard for a lot of pastors. They feel guilty if they are not available at all times and to all people. But that kind of constant availability is not sustainable, and it’s also not a wise use of time and resources.”

Throughout seminary, Reagan’s ministry in the area of productivity blossomed. Alongside the blog, he started a podcast called Redeeming Productivity. A website soon followed, with articles and classes that connected theology and productivity.

“From the start of Redeeming Productivity, I’ve tried to connect biblical theology and productivity so that people understand why we need to be productive,” Reagan said. “I often say that every approach to productivity comes with a theology. That’s because you can’t talk about productivity without talking about the ‘why’ of life. Why should you use your time efficiently? Why should you have certain priorities and not others? Why are you here and what is the purpose of life? What does it mean to live the good life? Those are all theological questions. And they are at the foundation of productivity.”

Reagan argues that only when a Christian has a biblical foundation in order can he develop the practical skills necessary to be productive on a day-to-day basis.

“The Christian life is driven by the glory of God,” Reagan said. “So, our productivity has His glory, not our improvement, as the goal. Being a good steward of the life God has given you is a critical way to glorify Him and fulfill the purpose for which you were put on the earth.”

Reagan’s new book outlines a theology of productivity, then shows how that theology is best applied.

“In Redeeming Productivity, I’m trying to be highly theological and highly practical. I want to make sure it’s doctrinally sound and actionable. It can’t just be theory. You have to give readers something they can actually do,” Reagan said.

In the coming years, Reagan prays that the Lord will use this book and his ministry to help Christians bear more fruit to the glory of God. And he is certain that any ministry he has is in part due to his time at TMS.

“I would not be able to talk about this subject like I do if I had not been trained at The Master’s Seminary,” Reagan said. “Knowing how to study and understand God’s Word is absolutely essential to what I do. It would be easy to borrow principles from the secular world of productivity and sprinkle a little bit of Christianity in it. I don’t want to do that. At TMS, I learned that our behavior is an outworking of our theology, and we get our theology from God’s Word. At TMS, I learned to study Scripture with some facility and apply it to life. That’s what Redeeming Productivity is all about. Taking God’s truth and applying it. Deep theology and practical application.”